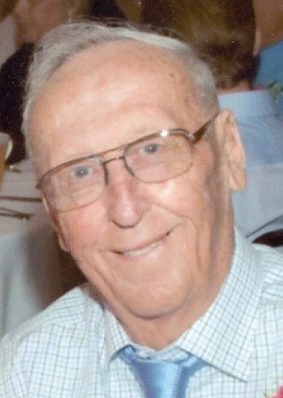 Sy (Sylvester) Vincent Terfehr, 88, of Wahpeton, ND, formerly Kent, MN, passed away, surrounded by his family, on Monday, July 2, 2018, at St. Francis Medical Center in Breckenridge, MN. Visitation will be held from 3 p.m. to 5 p.m. with a prayer service at 4 p.m. on Friday, July 6, 2018, at Joseph Vertin and Sons Funeral Home in Breckenridge. The funeral service will be held at 10:30 a.m. on Saturday, July 7, 2018, at St. Thomas Catholic Church in Kent with visitation one hour prior to the service.

Sy was born on March 24, 1930, to John and Rose (Nordick) Terfehr and was raised on a farm south of Kent. He attended school at District 17 in rural Kent and began farming at the age of 14 with his father and brother.

Sy and Rita Beyer were married on October 4, 1951, at St. Joseph’s Catholic Church in Brushvale, MN. They made their home on the Terfehr homestead where Sy farmed for many years. He was an active member in his church. He was a township supervisor for over 30 years. Sy enjoyed his time bartending at the Fort Saloon in Abercrombie, ND. In his later years, he and Rita spent their winters in McAllen, TX, and he enjoyed playing in a local whist club, hunting, and spending as much time with his family as he could.

Sy is preceded in death by his parents, John and Rose (Nordick) Terfehr; his son-in-law, Lyle; his granddaughter, Mary; and his siblings, Brother Julius, Mary, Lawrence, Florentina, (Agnes) Sr. Rita, (Rita) Sr. Helen, Ada, Theresa, and a sister, Florence, who died in infancy.

To order memorial trees or send flowers to the family in memory of Sylvester Terfehr, please visit our flower store.