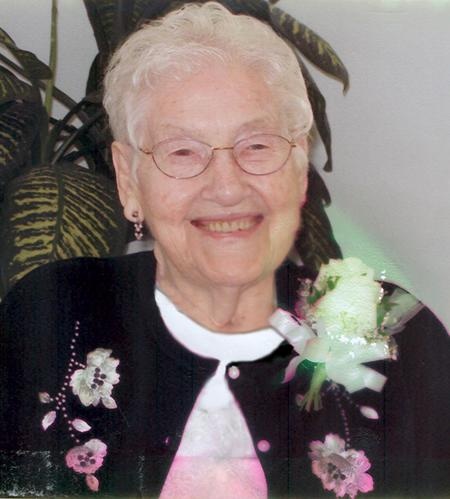 Sylvia M. Keller, 105 of Wahpeton, ND passed away on December 27, 2010. The visitation will be on Thursday December 30, 2010 from 5 to 7 pm with a prayer service at 7 at Joseph Vertin & Sons Funeral Home. The funeral will be at St. JohnA�A�A½s Catholic Church in Wahpeton, ND on Friday December 31 at 11:00 am with a visitation one hour prior to the funeral. Father Dale Lagodinski is officiating. Interment is at St. MaryA�A�A½s Cemetery in Breckenridge, MN
Sylvia was born November 19, 1905, to Louise and Carl Christianson near Hills, (Palmira township, Hector, Minnesota). She moved with her family to a farm between Nashua and Tintah in 1917 when she was 11 years old. After graduating from high school, Sylvia attended Moorhead Normal State College where she acquired her teaching certificate. Returning to this area she was accepted for a teaching position at the country school just A�A�A½ mile from the home of her future husbandA�A�A½s (John) family.
On November 26, 1927 Sylvia Christianson married John Keller. After marrying John she became his partner in working to have their own farm and a place to call home and raise their seven children. She was a constant support and encouragement to John. Together they became involved in church and social activities as well as caring for those less fortunate than they. They were involved in the Catholic Aid Society (St. MargaretA�A�A½s Council). Sylvia was their financial secretary for over 40 years. After participating in a continuing education program, Sylvia taught 8th grade C.C.D. for six years.
Sylvia and John retired in 1969 and lived in Breckenridge, MN, where they were active in the Senior Center and volunteer work there as well as St. MaryA�A�A½s Church.
After her beloved John died in 1987, Sylvia continued to live in Breckenridge and for the last 20 years has spent her life at St. CatherineA�A�A½s Living Center in Wahpeton, ND. Her greatest joy has always been the visits from her family and friends, writing her history, and, of course, the fun she has had playing cards with anyone who was willing to drag out the card table and pull up their chair.
Sylvia was preceded in death by her husband, John, her parents, brothers and sister, and her oldest son, Melvin. She will be greatly missed by her children who remember her as a mother who taught them many lessons by the way she lived her life. She was filled with acceptance of others, gratitude for her life with John and an unconditional love of her children: Lyle (Jeanne) Keller of Alexandria, MN; Dennis (MarJo) Keller or Breckenridge, MN; Ralph John (Maureen OA�A�A½Leary) Keller of Marana, AZ; Lyn (Larry) Stauder of Tucson, AZ; Eileen (John Bailey) Keller of Nerstrand, MN; Sid (Paulette) Keller of Hutchinson, MN; her 28 grandchildren; a growing multitude of great- grandchildren and great-great grandchildren who remember her as taking delight in their visits and hugs.
In lieu of flowers, the family requests donations to be sent to St. CatherineA�A�A½s Living Center at 1307 West 7th St. Wahpeton, ND 58075 in gratitude for all of the wonderful care their staff has given to Sylvia over the past 20 years.
To order memorial trees or send flowers to the family in memory of Sylvia Keller, please visit our flower store.