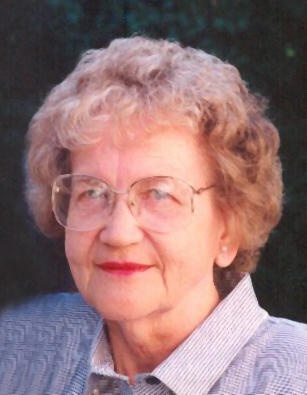 T. Marcia Hurni, long time resident of Campbell, Minnesota passed away on December 22, 2011 at the age of 85 in Little Falls, Minnesota surrounded by her family. The funeral will be Tuesday, December 27, 2011, at 11:00am at Faith Community Church, Campbell, MN. There will be a visitation 1 hour prior at the church. Pastor Wendell Kelm and Pastor Mike Nattale will be officiating. The interment is at Riverside Cemetery, Campbell, MN.

Marcia Bergum, daughter of Henry and Gladys (Brower) Bergum, was born on March 2, 1926 in Wahpeton, ND.

She grew up on a large farm in Dwight, North Dakota. Though she lost her mother at age 10, she was still able to master such things as tap dancing, commuting to Wahpeton, ND to graduate from High School at age 16, and receive her teaching degree from Moorhead Teacher's College by age 18. She then became an elementary teacher in Campbell, MN and that is where she met Lyle Hurni.

Lyle and Marcia were married on June 21, 1946 in Campbell. They spent their lives raising four children, Terry, Dale, Patricia, and Steven, on a farm near Campbell, MN. They raised dairy cattle until 1966, and continued crop farming until the mid 1970's. She and Lyle remained on the farm until moving to Little Falls, Minnesota. Lyle passed away December 29, 2001.

Marcia led a full life. She really enjoyed life at Campbell, with church, family, and the farm. She was President of the Ladies Auxiliary, active in the Faith Community Church, a member of the Eastern Star, and supported the school activities. She enjoyed needlepoint and baking , fishing on the Rainy River, travelling South during the winters, investing nickels and quarters at local casinos, and spending time with her friends and family.

Marcia is preceded in death by her husband, Lyle Hurni; her parents, Henry and Gladys Bergum; her two brothers, Lowell Bergum and Percy Bergum; her daughter-in-law, Deb Hurni; her granddaughter, Dawn Hurni, and many other loved ones.
To order memorial trees or send flowers to the family in memory of T. Hurni, please visit our flower store.