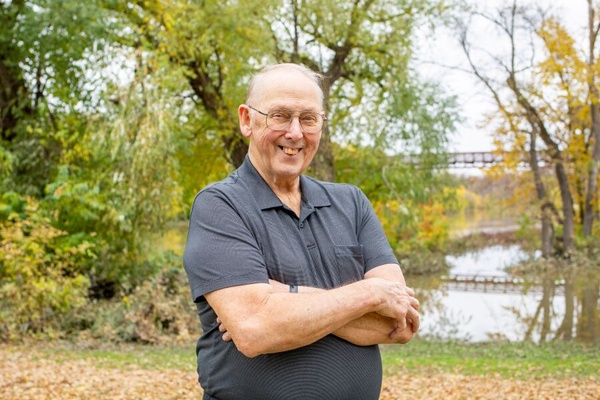 Ted Rossman, 78, of Moorhead, MN, formerly of Breckenridge, MN, was called home to heaven, surrounded by his loving family on Saturday, August 28, 2021, at the Fargo VA Hospital. The funeral service will be held on Friday, September 3, 2021, at 11 am at Grace Lutheran Church in Breckenridge, MN with a visitation one hour prior.  Burial will follow the service at Riverside Cemetery in Breckenridge, MN. Arrangements have been entrusted to Joseph Vertin and Sons Funeral Home.

Theodore “Ted” John Rossman was born on February 25, 1943, at St. Francis Hospital in Breckenridge, MN, to John and Marion (Lawrence) Rossman. Ted graduated from Breckenridge High School in 1961. On October 16, 1962, Ted enlisted in the United States Navy and served for 4 years as a Dental Technician.  Much of his enlistment was spent in Florida and Cuba.  After his enlistment, he attended North Dakota State College of Science in Wahpeton, ND, and obtained an associate’s degree in Business Management. On September 6, 1969, Ted was united in marriage to Judy Roach.  The two resided in Breckenridge and had two children, Vernon and Amy.  After college, Ted was employed as a Deputy Auditor for Wilkin County.  He quickly found out he was not suited for “office life”.  He then welded for over 20 years at Wil-Rich of Wahpeton, ND.  Ted’s final employment was at North Dakota State College of Science as a Custodian until retiring in February of 2008.

Ted was a continuous member of the American Legion of Breckenridge, MN, Post 53 for 56 years.  Ted loved the lake and going fishing with friends and family, especially his grandchildren.  He enjoyed being outdoors, watching the leaves change color and gardening.  He loved to play bingo and card games, and somehow always ended up drawing just the right card.  One of Ted’s special skills was napping - anywhere, anytime, and in any position.  Ted was fond of his neighbors and helping people and was always there to lend a hand.  Ted had the gift of gab.  He was a natural storyteller and would talk to anyone who would listen about anything and everything.   He enjoyed meeting new people and finding out all about them.   He loved telling jokes, sharing funny stories, and making people laugh, as well as laughing himself.  He truly was one-of-a-kind.

He is preceded in death by his parents, John and Marion Rossman; and his sister, Juanita Boelke.

To order memorial trees or send flowers to the family in memory of Theodore "Ted" Rossman, please visit our flower store.