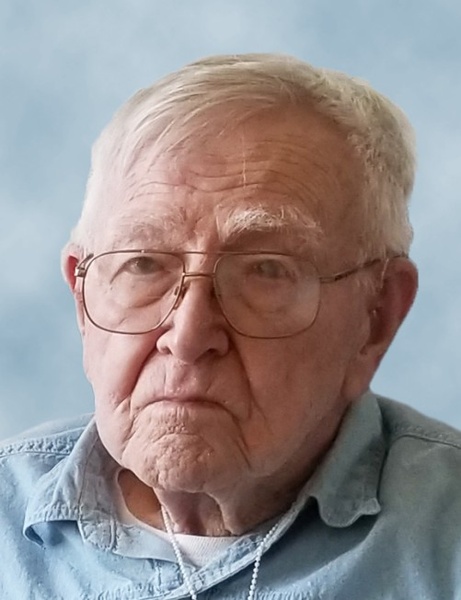 Virgil Matheson, 101, passed away October 31, 2021, at Twin Town Villa in Breckenridge, MN. A gathering of friends and family will begin at 1:30 p.m., Thursday, November 4, 2021, at Riverside Cemetery, Breckenridge, followed by a graveside service at 2 p.m. Rene Hasbargen will be officiating the service. Arrangements have been entrusted to Joseph Vertin and Sons Funeral Home, Breckenridge.

Virgil was born in Breckenridge on July 7, 1920, to Harry S. and Selma (Ness) Matheson.  He was the oldest of four children including brothers John and Harry, and sister Geraldine.  Not unlike his father, Virgil was a man of high moral integrity who knew the value of hard work.  Like his mother, Virgil was a teacher and mentor who shared his wisdom and cared deeply about his family. Growing up during the tough times of the Great Depression and WWII shaped Virgil’s character and his value of duty, honor, and country. In his youth, he worked with his father in the well-drilling and gravel business. Living most of his life on the river in Breckenridge, Virgil and his siblings made the most of it, swimming in the summer and skating in the winter with their neighborhood friends. He and his siblings had great stories to tell about their adventures.

Virgil was baptized and confirmed at Breckenridge Lutheran Church where the family was charter members.  He graduated Valedictorian of his class from Breckenridge High School in 1938 and continued his education at the North Dakota State School of Science School, earning a degree in Electrical Engineering in 1940. From there he went on to the University of North Dakota where he completed a Bachelor of Science degree in Electrical Engineering in 1942. He was immediately recruited by the Westinghouse Electric and Manufacturing Company in Pittsburgh, PA where he worked on various projects in support of the war effort. He also took graduate courses at the University of Pittsburgh during this time.

After his work for Westinghouse ended, Virgil returned to Breckenridge.  He was hired by NDSCS to teach in what is now the Electrical Technology program and served on the faculty from 1953-1967. During the summer months, he worked with his brother Harry in the family house-moving business. After leaving his teaching job, Virgil worked for Lake Region Electric in Pelican Rapids until his retirement, returning to Breckenridge to maintain things on the home front.

In 2018, at age 98, Virgil moved to Twin Town Villa in Breckenridge where the extraordinary care of the “angels” on staff allowed him to live his remaining years in comfort. The family also expresses their gratitude to CHI Home Health and Hospice for their compassionate care.

A confirmed bachelor, Virgil was a man of many talents. He was a fine woodworker. He collected guns and tools and could build or fix just about anything or he would be happy to teach you how to do it. An avid reader, you could always learn something when you had a visit with Virgil. His ambitious and independent spirit along with his intelligent mind was appreciated by the many people he helped in one way or another throughout his long life’s journey. Virgil was loved and respected by his family and friends and will be truly missed by all who had the privilege to know him.

He was preceded in death by his parents; sister, Geraldine (Verle) Langseth: brother, John (Elaine) Matheson; and brother, Harry Matheson.

To order memorial trees or send flowers to the family in memory of Virgil Matheson, please visit our flower store.

Gathering of Family and Friends