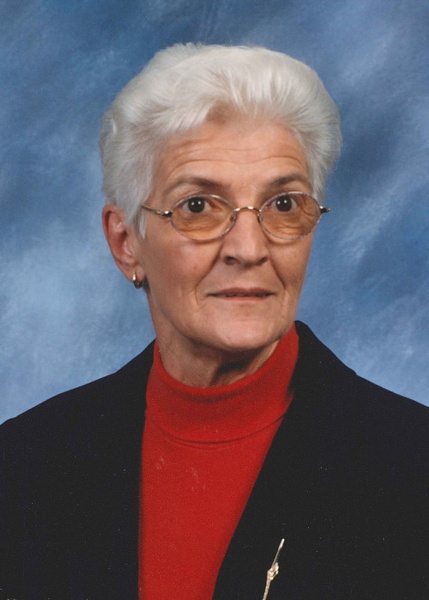 Virginia M. (Ginny) Frankl, 80, Breckenridge, MN passed away peacefully with family by her side January 13, 2018 in Valley Eldercare Center, Grand Forks. Visitation will be Friday, May 4, 2018 at 10:00 a.m. followed immediately by the funeral service at Joseph Vertin and Sons Funeral Home in Breckenridge. Inurnment will be at Fairview Cemetery in Wahpeton, ND.

Ginny was born on December 18, 1937 in Grand Forks, North Dakota to Stanley & Pearl (Spicer) Lezon. She grew up and attended school in Grand Forks.

Ginny was united in marriage to Lloyd Frankl on October 16, 1954.  Together, they made their home in Breckenridge, MN where they owned & operated Frankl & Sons Trucking until Lloyd’s passing in 1984.  After Lloyd passed away, Ginny worked at Leopold’s Nursery and then as a cook at Breckenridge High School until she retired.

Ginny was an avid gardener and enjoyed the outdoors.  She loved to feed and watch the birds and squirrels in her yard.  Ginny enjoyed reading and getting together with family and friends.

She is survived by her sons:  Britt (Andrea), Kim (Rhonda), Lonne, Corrie, and Carrie (Julie); her siblings: Lyle, Elton (Gabi), Caroline Kresel and Helen Jeffers; her 14 grandchildren and 25 great-grandchildren.

She is preceded in death by her husband, Lloyd Frankl; her parents, Stanley and Pearl (Spicer) Lezon; her siblings, Lucille Jones, Louie, Lloyd, and Mary Jane Sannes; her grandson, Cody; and great-granddaughter, Alex Marie.

To order memorial trees or send flowers to the family in memory of Virginia Frankl, please visit our flower store.