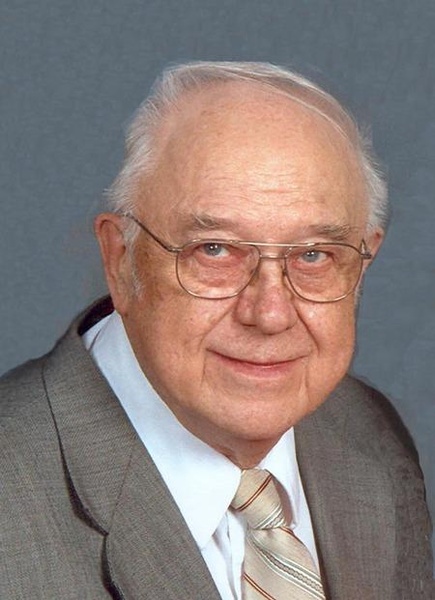 Wallace Robert Ladwig, 87 of Breckenridge, MN passed away on September 20, 2011 at St. Catherine's Living Center in Wahpeton, ND. The visitation is Thursday, September 22 from 5:00pm to 8:00pm at Joseph Vertin & Sons Funeral Home in Breckenridge. The funeral is Friday, September 23 at 11:00am at the First Baptist Church in Breckenridge. Officiating the service is Pastor Peter Erickson and Pastor David Cripe. Interment is at Fairview Memorial Gardens, Wahpeton, ND
Wallace (Wally) was born on August 22, 1924 in Fergus Falls, MN as the only child to Robert and Hulda (Steinbach) Ladwig. He grew up and attended schools in Fergus Falls graduating in 1943. Following high school, Wally went to work at the Red Owl grocery store in Fergus Falls eventually moving to Breckenridge, MN to manage the Red Owl store there. On July 6, 1952, Wally was united in marriage to Dorothy R. Kurka at the First Baptist Church in Breckenridge. They made their home and raised their two daughters in Breckenridge. He began his banking career at First National Bank, in time becoming a vice president. He retired from the bank in 1991.
Wally's hobbies included fishing the small lakes of Ottertail County, especially Friberg Dam. He also took great pride in maintaining his parents' farmstead. As a community minded citizen of Breckenridge, he was involved in Rotary, Toastmasters, and the First Baptist Church.
Wally is survived by his daughters Corrine (Craig) Johnson of Redfield, SD and their son Samuel of Meade, KS; Karla Ladwig of St. Paul, MN; many nieces, nephews and cousins. Wally is preceded by his wife Dorothy (2003) and his parents Robert and Hulda Ladwig
To order memorial trees or send flowers to the family in memory of Wallace Ladwig, please visit our flower store.