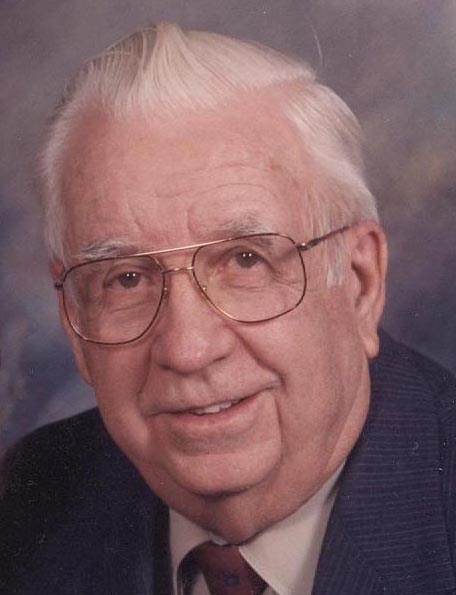 Wallace Clark Retrum, 92, of Breckenridge, MN, passed away at St. Catherine's Living Center in Wahpeton, on Thursday, August 21, 2014. The visitation will be from 12:00 to 1:00 PM on Tuesday, August 26, at Breckenridge Lutheran Church, followed by the funeral at 1:00 PM. Pastor Mark Manning will be officiating. The interment will be at Riverside Cemetery in Breckenridge.
Wallace, "Wally" as he was fondly referred to by his family and friends, was born in Dawson, MN, on February 9, 1922, one of 6 children born to Louis and Clara (Hellie) Retrum. One year later, the family moved to Cottonwood, MN. He was baptized and confirmed in the Lutheran Faith. As a teenager, Wally helped out in his parents' grocery store. He graduated as the Valedictorian of his class from Cottonwood High School in 1939. He then attended Augsburg College in Minneapolis, MN, for 2 years. Following college, he worked for National Tea Grocery Store in Minneapolis, MN, for one year before enlisting in the US Army. He proudly served his country during World War II in the Philippine Islands and New Guinea. He was honorably discharged in 1946.
Wally exchanged wedding vows with the love of his life, Ethel Anderson, on December 14, 1947, in Minneapolis, MN. They made their home in Grafton, ND, where he managed the food department for Gamble Skomgo. In 1949, he seized the opportunity to become a partner with his cousin, owning and operating the Fairway Foods Grocery Store in Dawson, MN. In 1958, Wally was employed as a feed salesman by the Schuler Grain Company in Breckenridge. He then moved his family to Breckenridge in 1959. He at worked at Schuler Grain until his retirement in 1985.
Wally was an avid golfer and a zealous bowler. He enjoyed both sports for over 30 years and he even experienced the thrill of a hole-in-one in 1997, at the age of 75. He treasured his annual trip to Harlingen, Texas. He loved to kick his heels up on the dance floor. He looked forward to playing bingo and cards, and watching many kinds of sports on TV. Wally enjoyed gardening and spent many thought-provoking hours reading his bible. He valued his friends and family and appreciated the time they spent together. He was a man of strong faith, a devoted husband, and a loving father. He was a member of Breckenridge Lutheran Church, American Legion Post 53, and the Wahpeton Eagles Club #2749.
Wally is survived by his children, Kevin (Karen) Retrum of Moorhead, MN, and Julie Anderson of Fargo, ND; his grandchildren, Megan, Travis, Zachery, and Sara; his 5 great-grandchildren; and his sister, Carolyn (Ted) Buckmaster of Bloomington, MN. He is preceded in death by his parents, Louis and Clara; his wife, Ethel; his son, Dewey; his son-in-law, Bill Anderson; and his four brothers, Paul, Robert, James, and Ordell.
To order memorial trees or send flowers to the family in memory of Wallace Retrum, please visit our flower store.