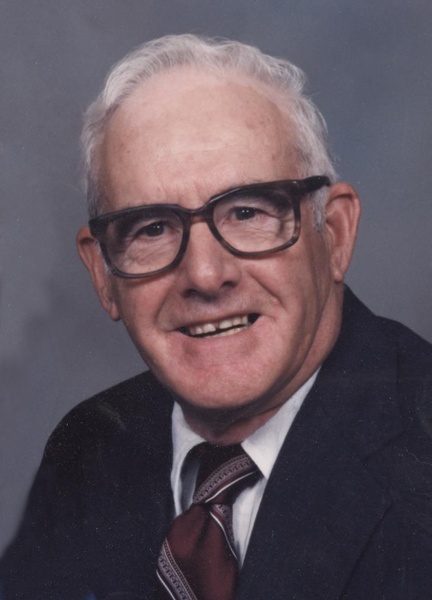 Walter Alphonse Hulne, 92, of West Fargo, ND, formerly of rural Abercrombie, ND, passed away on Wednesday, November 4, 2015, at Sheyenne Crossing Care Center in West Fargo, ND. The visitation will be on Sunday, November 8, from 5:00 to 8:00 p.m. with the prayer service at 7:00, at Joseph Vertin & Sons Funeral Home in Breckenridge. The Mass of Christian Burial will be at 10:30 a.m., on Monday, November 9, at St. Thomas Catholic Church in Kent, MN. Father Joseph Backowski will be the celebrant. The interment will be at St. Thomas Catholic Cemetery in Kent.
Walter was born on May 22, 1923, one of six children born to Alphonse and Mary Belle (Prody) Hulne in Kent, MN. He attended a one room country school near Abercrombie and graduated in 1942, from Christine High School. On Jan 9, 1951, Walter was united in marriage to the love of his life, June Elaine Miller, at St. Arnold's Catholic Church, in Milnor, ND. They made their home on a farm near Abercrombie, where together they worked the land and raised their three children. In addition to farming, Walter was a very involved community man. He served on the Richland School Board for many years and was a committed 4-H leader. He was an active member of St. Thomas Catholic Church and the Catholic Order of Foresters. In 1979, Walter and June began spending their winters in McAllen, TX, and then eventually retired from farming in 1984. In 2003, they moved from their farm into Breckenridge.
Walter loved to match wits in a good game of Whist or Pinochle. He enjoyed summers at their cabin on Deer Lake and the tranquility of fishing. He looked forward to family gatherings, particularly spending time with the grandchildren. Walter valued kindness and lived out integrity which steered an unwavering commitment to helping others, a legacy his family will always treasure.
Walter will be missed by his wife of 64 years, June; his children, Roger (Patricia) Hulne of Prescott, WI; Dennis (Lesley) Hulne of Abercrombie, ND, and Mary (William) Lisburg of West Fargo, ND; his 12 grandchildren, and 7 great-grandchildren; his brothers, Joe Hulne of Breckenridge and Clarence (Betty) Hulne of West Fargo; his sisters, Elsie Pedersen of Breckenridge and Gladys Ritchie of Kent. He was preceded in death by his parents, Alphonse and Mary Belle; an infant granddaughter, Rebecca Lisburg; his sister, Margaret Krook; his sister-in-law, Helen Hulne; and his brothers-in-law, Herb Ritchie and E.A. "Curly" Pedersen.

Walter Alphonse Hulne
To order memorial trees or send flowers to the family in memory of Walter Hulne, please visit our flower store.