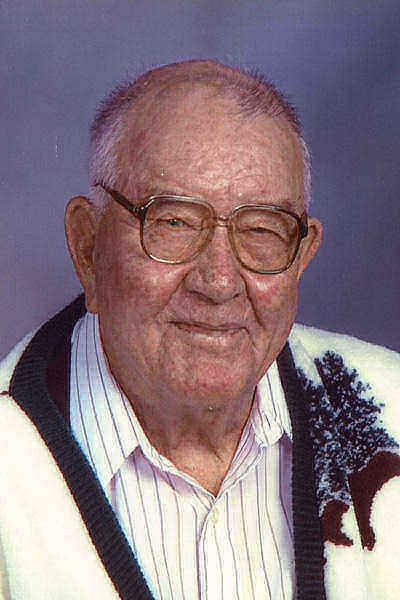 Warren Priebe, 92 of Fargo, ND formerly of Breckenridge, MN, died Friday, February 1, 2013 at Essentia Health. The visitation will be from 1:00 to 4:00PM with a prayer service at 3; Sunday, February 3, at Joseph Vertin & Sons Funeral Home, Breckenridge. The funeral will be Monday, February 4 at 1:00PM at Grace Lutheran Church in Breckenridge, with Pastor Ryan Drevlow officiating. The interment will be at Christ Lutheran Cemetery, Wolverton, MN at a later date.
Warren was born May 27, 1920 to Edward and Edith (Matz) Priebe Mitchell Township, MN. He attended country school and graduated from Wolverton High School. He was confirmed at Christ Lutheran Church. On November 7, 1943, Warren was united in marriage to Matilda Drewlow. They made their home on the family farm where Warren farmed the land. From this union, they were blessed with four children. After the early loss of his wife, he married Ruby Buth in September of 1974. Upon retiring from farming, they moved to Breckenridge.
Warren was active in Christ Lutheran Church where he taught Sunday school and was on the church board. He was also on the Mitchell township board for many years. He enjoyed spending time with his family, especially his grandchildren. For the past 9 years, Warren lived in the Fargo/ Moorhead area.
Warren is survived by daughters, Corrine (Ordean) Haugen of Mandan, ND and Renee (Scott) Hootman of Eldora, IA; his son, Dean (Debra) Priebe of Lincoln, ND; 16 grandchildren and many great-grandchildren; his nieces and nephews; his sisters Roymane Christiana of Glacier, MT and Beth Sherwin of Northfield, MN.
He is preceded in death by his parents Edward and Edith; his first wife Matilda; his second wife Ruby; his daughter Carol Buth.
To order memorial trees or send flowers to the family in memory of Warren Priebe, please visit our flower store.