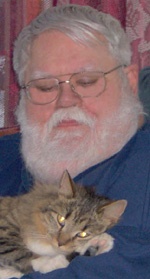 The funeral for will be Saturday, May 2, 2009 at 1:00 p.m. at Joseph Vertin & Sons Funeral Home Chapel, , with Pastor Mark Manning officiating. Visitation will be one hour prior to the funeral at the funeral home.

was born January 24, 1951 in , the son of Lloyd and Bessie (Powell) Buelow. He grew up and attended school in , where he graduated from high school in 1969. He enlisted the Army National Guard in 1970 and was in the military for six years.

On September 9, 1972, was married to Patricia Dosen in . The couple lived in , where worked for Genuine Auto Parts, drove handicapped vans, worked for Gopher Courier Service and various other jobs. He helped with Red Cross for five years and was a volunteer fireman for the Brooklyn Park Volunteer Fire Department for sixteen years. moved to five years ago and was currently residing at the Park Manor.

We know he is in a better place. He will be missed by many.

He was preceded in death by his parents, Lloyd and Bessie Buelow.

To order memorial trees or send flowers to the family in memory of Wayne Buelow, please visit our flower store.