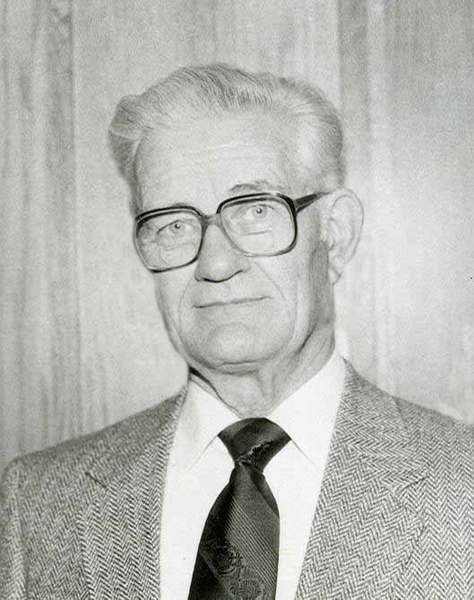 Joe is survived by:His wife: Irene, Campbell, MN; and his brother: John Doyle, Great Falls, MT. He was preceded in death by: His parents: William J. and Sophie Doyle; His brother: Phillip; His sisters: Jean, Theresa, Ramona and Lorraine

William Joseph Doyle Jr. was born November 28, 1917 in LaMoure, ND, the son of William and Sophie (Nanik) Doyle. He lived in Edgely, ND then moved with his family to Veblin, SD, where he graduated from high school in 1936. Joe then went to work for the Soo Line Railroad. On April 7, 1941, he married his high school sweetheart, Irene Thompson. Joe continued working for the Soo Line, mostly as a depot agent, telegrapher and dispatcher. They moved to Campbell, MN in January, 1949. Joe and Irene lived in Campbell until 1972, when they purchased their farm east of Campbell. Joe retired from the Soo Line in 1977.

Joe was a member of St. Gall's Catholic Church in Tintah, MN, where he was a trustee for the parish from 1980 to 1988. He spent many hours working with contractors during the building of the new parish center in 1982 after the tornado demolished the old parish hall. He and Irene enjoyed going to Weslaco, Texas in the winter months. This winter was their 22nd winter there, where they are members of St. Pious X Catholic Church and the Ranchero Village Mobile Home Park.

To order memorial trees or send flowers to the family in memory of William Doyle, please visit our flower store.