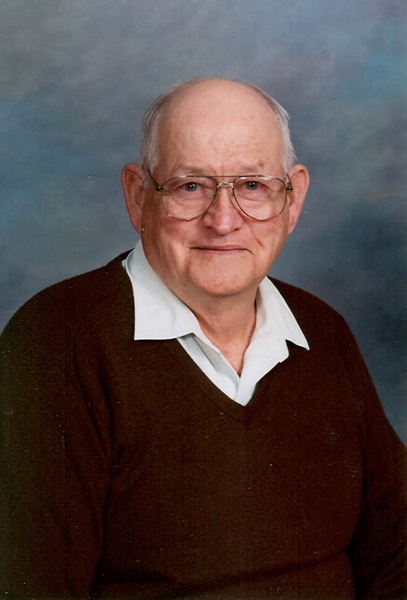 William J. “Bill” Stach, 83, rural Wolverton, MN, passed away on Friday, December 26, 2008, at his home at rural Wolverton, MN. Funeral services will be on Monday, December 29, 2008 at 10:00 AM at St. Thomas Catholic Church, with Father Stan Weiser officiating. Visitation will be on Sunday, December 28, 2008 from 4 pm to 8 pm with a prayer service at 7:00 PM at Joseph Vertin & Sons Funeral Home, . There will also be visitation one hour prior to the funeral at the church. Interment will be at , MN.

William “Bill” Stach was born January 25, 1925, the son of Gustave and Catherine (Zeimetz) Stach at the family farm. He grew up and went to the District 21 country school which was located about one mile from the farm. Bill joined the US Army in 1944 wanting to fly but ended up in the infantry. He received two purple hearts while defending our freedom.

On February 17, 1946 Bill was united in marriage to his one true love Evelyn Marie Fobes. In their early married life they farmed near Henning and , later farming the family farm near Wolverton where they reside for 60 plus years of marriage. Bill was on the board for many years and was a member of the NFO, Lifetime member of the NRA, and Wolverton American Legion and Wahpeton VFW. Bill and Evelyn worked side by side on the family farm and raised many vegetables in their huge garden they were so well known for.

Bill enjoyed many things outside of farming. He loved to hunt in northern , the mountains of , and around the family farm. If he wasn’t hunting he would fishing at one of the lakes or even at the local gravel pit.

He was preceded in death by his parents, Gustave and Catherine Stach; his wife, Evelyn Stach; his daughter, Peggy Stach; his son- in-law, Mike Miller; his brothers, Emil, George, Leo, Henry, Harold, Gustave, and Vincent; and his sisters, Minnie Knutson and Elsie Powelson.
To order memorial trees or send flowers to the family in memory of William Stach, please visit our flower store.