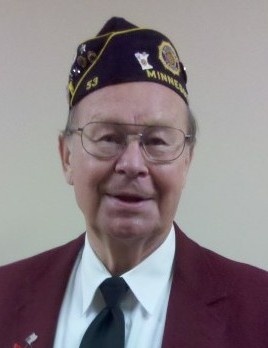 Willis “Will" Shasky, 91, of Fergus Falls, MN, formerly Breckenridge, MN, passed away at the Minnesota Veterans Home, Fergus Falls, on Friday, February 14, 2020. The funeral service will be held at 11 a.m., Saturday, March 7, 2020, with a visitation one hour prior to the service at Breckenridge Lutheran Church, Breckenridge. Pastor Mark Manning will officiate. Burial will be held at Sunset Memorial Gardens, Fargo. Arrangements have been entrusted to Joseph Vertin and Sons Funeral Home, Breckenridge.

Willis, affectionately known as “Will,” was born in Forman, ND, on January 6, 1929, to Romey and Nina (Nelson) Shasky. He grew up and attended school at Rutland Consolidated and Forman Schools, graduating in 1946. After this, Will joined the North Dakota Air National Guard. The United States Air Force activated his unit on April 1, 1951, and he was honorably discharged on October 7, 1952. Willis continued to serve in the North Dakota Air National Guard until his honorable discharge on October 31, 1953.

On May 10, 1952, Will was united in marriage to Eunice Lindberg at First Lutheran Church in Fargo, ND. He then continued his education at North Dakota State University, Fargo, and Moorhead State College, Moorhead, MN, where he received his Teaching master’s degree from Moorhead State College.

The couple moved to Fergus Falls, where Will began his career in education at Underwood, MN, and served as the school’s basketball coach. In 1962, they made their home in Breckenridge where he taught for 27 years in business education, industrial arts, and driver’s education. During the summer months, Will was a hail adjuster for eight years with Great American Insurance Company out of Fargo, ND. Will and Eunice retired in the 1990’s and they continued to reside in Breckenridge. They treasured raising their family in a small town for the values and sense of community that helped support them for so many years.

Will was very active in the community, participating in organizations such as Breckenridge Lutheran Church as a councilman, American Legion, former commander of Alfred Lockman Post 52, American Legion Boy’s State Chairman for 45 years, and 40 & 8 society. He was also involved with the Wilkin County Honor Guard for over 60 years, a lifetime member of the Minnesota Education Association, Business Education Teacher’s State Board president, and a member of the Eagles, Elk, and Wahpeton Buffalo Club. In his spare time, Will was an avid outdoorsman; he loved hunting, fishing, and traveling the United States to visit their children, family, and friends. Will and Eunice loved escaping the cold winter Minnesota months in Phoenix, AZ. He always looked forward to visiting their legacy family property in the woods near Perham, with his family. Will also took part in Lutefisk church dinners in the area and his yearly pilgrimage to Minot, ND for Hostfest, North America’s largest Scandinavian festival. Throughout the years, he was an active reader of Western history and accumulated an impressive collection of wildlife art and sculptures.

In lieu of flowers, the family requests memorial donations be made to Dakota Boys and Girls Ranch: https://www.dakotaranch.org/ways-to-give/

To order memorial trees or send flowers to the family in memory of Willis "Will" Shasky, please visit our flower store.