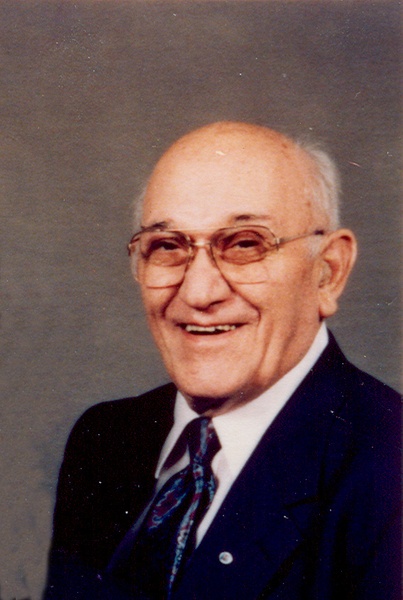 William A. “Tony” Radke was born on March 9, 1913 in near to William and Tina (Glander) Radke. He grew up and attended District #74 near Brushvale and then where he graduated in 1931. He then attended NDSCS for a short time. He worked for a roofing company and in 1937 began working for the Great Northern Railroad. In February of 1943 he joined the US Army and was an engineer for the railroad in and was discharged in January of 1946. He returned to Breckenridge and worked as a fireman for the Great Northern and was later promoted to engineer until he retired in April of 1978. Tony was also in the bee and honey business for fourteen years.

In his earlier years, Tony enjoyed riding his Harley-Davidson motorcycle and spoke of it often. Tony and his first wife Marvel were excellent bowlers and Tony continued to bowl until late in life. He also enjoyed golf, playing cards, and being at the lake with family. He also got together and shook dice daily with his friends in the Coffee Clutch Gang.

He was preceded by, his parents, William and Tina Radke; his first wife, Marvel (Applin) Radke; his brother, Carl Radke.

To order memorial trees or send flowers to the family in memory of Wm. Radke, please visit our flower store.